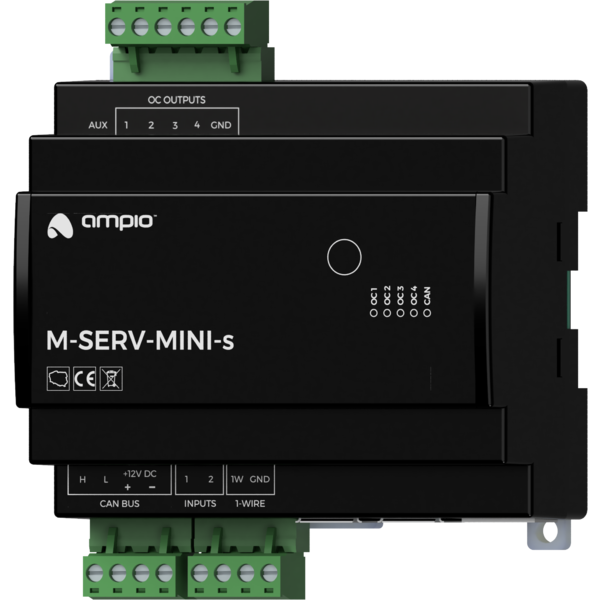 Module M-SERV-MINI-s is a component of the Ampio system. Required voltage to power the module is 11 — 16V DC. The module is controlled via CAN bus.

The M-SERV-MINI-s module is a communication gateway for Ampio mobile applications - both within the local network and via the Ampio Cloud platform - and enables IP integrations. It also has two ground-detecting inputs, four two-state OC outputs and 1-Wire interfaces. The device can also be used as a multi-zone temperature controller.

The Ampio UNI mobile application enables control over the building automation installation via smartphones and tablets. It also allows the end user to define and run scenes and implement simple automation rules.

With the use of the module, it is possible to integrate devices and services that provide integration interfaces within the computer network. Integration rules are implemented in the Node-RED open source platform that allows for the definition of information flows and processing diagrams.

In the Node-RED environment, interaction with external devices and services can be accomplished in a number of ways. A technologically skilled user can carry on integrations based on basic communication interfaces, such as HTTP API or MQTT. There is also a possibility to use ready-made integration blocks developed by the Node-RED project community.

The Node-RED environment is available to both the installer and the end user. Integrations implemented with its use may apply to devices from other manufacturers, as well as services available in the network. There is also an option, for example, to send SMS messages using GSM gateway services, or display information on stock exchange quotations or weather forecasts on touch panels.

At the device configuration stage, it is also possible to implement simple IP integration rules using an actions mechanism configurable through the Smart Home Manager software.

The device includes an SIP server intended for integration with intercoms supporting the VoIP technology. When properly configured, it allows one to receive intercom calls on smartphones or tablets. It is also possible to configure an external VoIP service provider, thanks to which receiving calls from intercoms or other integrated VoIP devices will also be feasible from outside the local network.

The M-SERV-MINI-s module also defines its internal telephone number intended for invoking actions via VoIP connection. At the device configuration stage, one can define the reaction of the building automation system to specific sequences of numbers and characters * and #, sent to the device during a VoIP call with the above-mentioned number.

In addition to the described features, the device also supports the following functionalities:

The module has open-collector outputs allowing for switching of resistive loads supplied with voltage up to 24V DC. It is also allowed to control loads of moderate inductive nature, in particular, relays. Internally, each of the outputs allows the connected line to be short-circuited to the module’s ground.

Unlike the OC outputs found in most modules from the Ampio offer, the outputs of the M-SERV-MINI-s module do not allow for smooth control - it is only possible to switch individual outputs on and off.

The module allows for the implementation of temperature control logic. Regulation is performed independently for a number of defined zones.

Within each zone, a temperature sensor is recognised, which determines the zone’s current temperature. The selection is made from sensors connected to any of the Ampio modules equipped with a 1-Wire interface, or sensors that are integrated into the building automation system in any other way, for example, via integration modules.

One or more heating or cooling devices are associated with each zone. Interaction with devices is performed by any output or integration module present in the building automation bus.

The temperature control set value can be determined by the end user manually via the mobile app or via Ampio touch panels. Through the mobile application, the user also has the option of defining time schedules that specify the expected temperature of each zone in time.

For each zone, two specific temperature values are also defined - comfortable and economical. Switching the controller set point value to one of the temperatures mentioned above can be quickly triggered by any other building automation device, e.g. by pressing a touch panel’s field. The values of these temperatures are defined by the end user and may also be used as a part of schedule definitions.

The operation of defined heaters and coolers is controlled on the basis of the measured value of the control zone’s current temperature and the current set value. The process can be governed by the following control algorithms:

The module can manage from 1 to 32 temperature control zones.

The module is equipped with a 1-Wire interface connector that allows to connect up to 6 digital Dallas DS18B20 temperature sensors. The temperature measurement result is available for all devices operating within the building automation bus. It may turn out to be particularly useful for purposes related to temperature regulation, or to present the measurement result on touch panels and in a mobile application.

The total length of the 1-Wire bus cable to which the temperature sensors are connected cannot exceed 15m.

The module is designed for mounting on a 35mm DIN rail. The module’s width is 105mm, 6 spaces/modules in DB. In order to start the module, it must be connected to the CAN bus. The bus of the Ampio system consists of four wires - two for power and two for communication between the modules.

In addition to the CAN bus interface, the device has four connectors with screw terminals. They allow for the connection of two signal lines to ground-detecting inputs, four resistive loads to open-collector outputs and up to 6 digital Dallas DS18B20 temperature sensors.

In the case of loads with low power consumption, in particular small relays, it is possible to use the AUX terminal located on the open-collector outputs' connector, in order to power the devices. This terminal has the same voltage as the module’s supply voltage. The current consumption of devices connected to the AUX terminal must not exceed 200mA.

Next to the screw terminal connectors, at the bottom of the module, there are Ethernet interface connectors and USB connectors. Connecting the device to the Internet is a prerequisite for using the device’s IP functionality.

In addition, a part of the device’s configuration is carried out through communication within the local network using the following tools:

The Smart Home Manager software allows one to define the user interface of the building automation installation available in the mobile application. The interface is built by defining views, which contain widgets that present information about the state of the installation and allow the user to interact with it. The application also allows to implement simple IP integrations with the use of the actions mechanism.

The device provides a configuration utility accessible through a web browser. After logging in to the utility, basic information about the device is available. It is also possible to configure the IP connection and network services provided by the device.

The M-SERV-MINI-s module broadcasts information about the current time in the automation bus every full minute. The rest of the system’s devices listen to this information only when their configuration includes time-dependent conditions.

In a situation where a time-dependent configuration is uploaded into a device without internal information about the current time, the information from the M-RT-s will be interpreted by this device only at the next full minute and only then it will be possible to evaluate the time condition.

The described specificity of operation does not have any impact on the functioning of the system during its normal operation, but it may lead to the erroneous impression that the condition does not work during programming.

Finding the device in the network

The M-SERV-MINI-s module also broadcasts its IP address via the mDNS protocol - in the case of client devices that support this technology, the module will be available under the ampio.local domain name.

After proper configuration of the computer’s network interface, each module from the M-SERV family is also visible at the address 10.76.100.100 in the network with the mask 255.255.255.0. However, this address cannot be used when there is more than one such module within one local network.

The IP address of the device can also be found on the display on the module’s front.

In order to implement network functionalities, the M-SERV-MINI-s device can establish network connections with a number of services available on the Internet. For typical network environment configurations, no additional actions should be required. However, if the device is to operate in a more restrictive environment, such as corporate networks or other networks with a strict firewall configuration, it may be necessary to explicitly allow the device to make the required connection. To do this, it is useful to refer to a list of destination ports with which the device connects.

The M-SERV-s device provides considerable freedom in terms of implementing custom IP integrations, especially using the Node-RED platform. Such integrations may imply that the device establishes further connections, other than those mentioned above. The characteristics of such connections depend on a specific integration and are beyond the scope of this document.

On the first launch of the device, it must be initialised. The initialisation consists of defining data for the server access - server network services are not available until strong passwords of system users are established. After setting up the passwords, the device is restarted. During the reboot, configuration activities that may take up to 15 minutes are performed.

Initialisation of the device is also necessary after updating the server software - after setting up passwords and completing configuration activities, it is possible to upload configuration copies created before the update.

The software and configuration related to the implementation of the module’s IP functionality are stored on an SD card. However, moving the SD card from one device to another is not a correct way to transfer data between them. When M-SERV class modules start operating with an SD card that they do not recognise, an initialisation procedure is launched, during which the device’s configuration is restored to its factory settings.

Moving an SD card from one M-SERV class device to another results in the deletion of the configuration saved on the card!