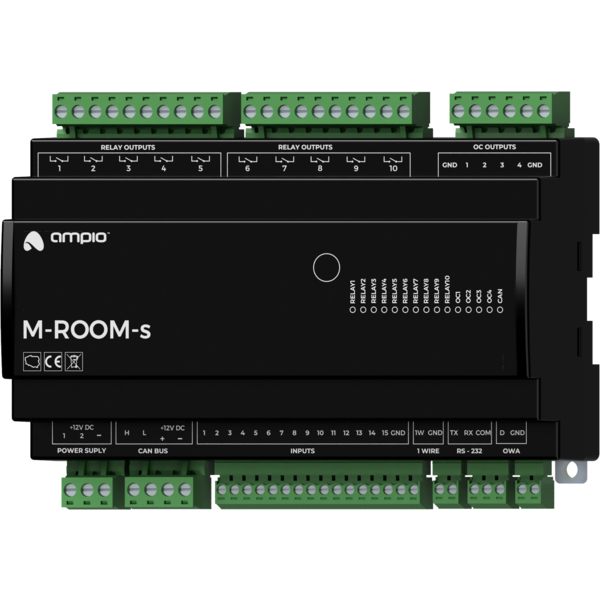 Module M-ROOM-s is a component of the Ampio system. Required voltage to power the module is 11 — 16V DC. The module is controlled via CAN bus.

The module can provide many of the functionalities envisioned by the Ampio building automation system’s architecture. As such, it is intended as a single device that allows to cover most of the needs of installations found in small houses, apartments or hotel rooms.

This document describes all the functionalities that can be implemented in the device. The M-ROOM-s module is available by special order, in which the module’s custom functionalities are specified.

Early revisions of M-ROOM-s modules with a PCB number lower than 2, instead of ground-detecting inputs, were equipped with 14 supply voltage detecting inputs.

Early revisions of M-ROOM-s modules with a PCB number lower than 2, instead of ground-detecting inputs, were equipped with 14 supply voltage detecting inputs. If one need to connect a newer module to an installation prepared for an older one, it is needed to modify the connection method. Refer to the connection diagram to determine the nature of the required modifications.

The module has SPST relay outputs that enable switching on resistive and inductive loads. The module relays are normally open. The table below shows the permissible operating parameters of the relays depending on the nature of the load.

As part of the module configuration, it is possible to activate the functionality of a roller shutter and a blind drives' controller. This mode is intended for the control of devices powered by electric motors with a variable direction of movement and a limited movement range. For example, roller shutters and blinds' drives. However, this mode can also be used in other devices of a similar nature, such as, e.g. gates.

In the controller mode for roller shutters and blinds' drives, pairs of the device’s relay outputs work as a single compound output dedicated to controlling a single connected device.

The controller mode for roller shutters and blinds' drive is designed to control devices with built-in limit switches that disconnect the drive’s power supply when the ends of the range of motion are reached.

In the primary operation mode of the relay outputs, they are controlled by switching on or off individual outputs. In the case of pairs of relays operating in the roller shutters and blinds' drive controller mode, the control is performed by closing and opening commands or by setting the opening level. When it comes to blinds, it is also possible to set the position of slats.

During operation, the module estimates the state of the controlled device, i.e. the degree of opening and the position of slats (if applicable). This information is available within the building automation bus and is used internally to perform control in terms of the degree of opening or deflection angle of the slats.

A single pair of relays operating in a controller mode for roller shutters and blinds' drives can only be connected to a single drive. Any other connection may result in incorrect operation of the device, as well as permanent damage to both, the module and the drive.

As part of the module’s configuration, a selection is made of which pairs of relay outputs are to support the discussed functionality.

The module has open-collector outputs allowing for smooth control of resistive loads supplied with voltage of up to 40V DC. It is also allowed to control loads of moderate inductive nature, in particular relays. Control is performed by the method of pulse-width modulation (PWM). Internally, each of the outputs allows the connected line to be short-circuited to the module’s ground.

As part of the module’s configuration, it is possible to activate the functionality of the RGBW lighting controller. Nominally, each of the open-collector outputs is controlled independently. When the functionality is activated, the control is done by defining the colour and intensity of the light.

The module allows the integration of devices equipped with an RS-232 communication interface with the Ampio building automation system. Depending on the integrated device, at the configuration stage, the appropriate interface operation mode should be selected. The following list presents possible variants:

As part of the device, the voltage supplied by each of the power supplies is measured - the measurement result is made available in the building automation bus.

The OWA lighting bus (One Wire Ampio) is a solution dedicated to controlling LED lighting. Each bus segment contains a controller and up to 16 lighting node drivers or LED lamps with integrated drivers. From the controller level, it is possible to smoothly adjust the brightness of light sources connected to each of the controllers. It is possible to control sets of light points or individual lights independently. It is also possible to implement the so-called staircase effect, i.e. smooth brightening and dimming of consecutive light points along the stairs, driveway, etc.

The OWA lighting bus consists of two wires - a ground wire and a wire that ensures communication between the controller and the drivers of a lighting node. Lighting node drivers also require a power line, hence the OWA bus is usually run with a three-wire cable.

The module allows for the implementation of temperature control logic. Regulation is performed independently for a number of defined zones.

Within each zone, a temperature sensor is recognised, which determines the zone’s current temperature. The selection is made from sensors connected to any of the Ampio modules equipped with a 1-Wire interface, or sensors that are integrated into the building automation system in any other way, for example, via integration modules.

One or more heating or cooling devices are associated with each zone. Interaction with devices is performed by any output or integration module present in the building automation bus.

The temperature control set value can be determined by the end user manually via the mobile app or via Ampio touch panels. Through the mobile application, the user also has the option of defining time schedules that specify the expected temperature of each zone in time.

For each zone, two specific temperature values are also defined - comfortable and economical. Switching the controller set point value to one of the temperatures mentioned above can be quickly triggered by any other building automation device, e.g. by pressing a touch panel’s field. The values of these temperatures are defined by the end user and may also be used as a part of schedule definitions.

The operation of defined heaters and coolers is controlled on the basis of the measured value of the control zone’s current temperature and the current set value. The process can be governed by the following control algorithms:

The module can handle from 1 to 32 temperature control zones.

The module is equipped with a 1-Wire interface connector that allows to connect up to 6 digital Dallas DS18B20 temperature sensors. The temperature measurement result is available for all devices operating within the building automation bus. It may turn out to be particularly useful for purposes related to temperature regulation, or to present the measurement result on touch panels and in a mobile application.

The total length of the 1-Wire bus cable to which the temperature sensors are connected cannot exceed 15m.

The module is designed for mounting on a 35mm DIN rail. The module’s width is 160mm, 9 spaces/modules in DB. In order to start the module, it must be connected to the CAN bus. The bus of the Ampio system consists of four wires - two for power and two for communication between the modules.

In addition to the CAN bus interface, the device has eight connectors with screw terminals. They allow to connect:

In order to connect to an external device using the RS-232 interface, one must prepare a cable terminated with a connector suitable for the device that is being integrated. The device connection diagram presents a variant of such a connection with a short circuit of the DCD, DTR and DSR lines. Before integration, read the manual of the integrated device to see, if the connection is required by it.

The AUX terminal of the supply voltage-detecting inputs connector provides the voltage that can be used when connecting the contacts of devices being integrated to the inputs.

If the current consumed by all loads connected to the open-collector output is lower than 16A, it is sufficient to connect one ground terminal to the external power supply. With two terminals connected, the maximum current is 32A.

The M-ROOM-s module broadcasts information about the current time in the automation bus every full minute. The rest of the system’s devices listen to this information only when their configuration includes time-dependent conditions.

In a situation where a time-dependent configuration is uploaded into a device without internal information about the current time, the information from the M-RT-s will be interpreted by this device only at the next full minute and only then it will be possible to evaluate the time condition.

The described specificity of operation does not have any impact on the functioning of the system during its normal operation, but it may lead to the erroneous impression that the condition does not work during programming.

Instructions on how to connect the OWA lighting bus are available in the documentation of the lighting node drivers and LED lamps with integrated drivers.