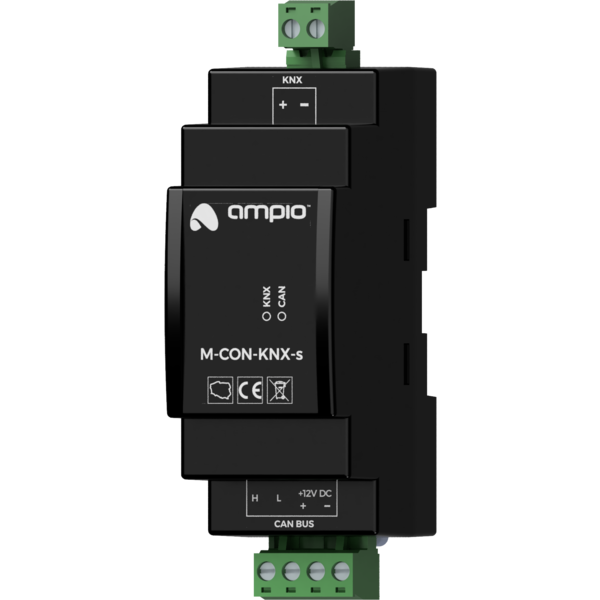 Module M-CON-KNX-s is a component of the Ampio Smart Home system. Required voltage to power the module is 11 — 16V DC. The module is controlled via CAN bus.

The module enables two-way communication between devices operating within the CAN and KNX bus. Both buses used by the device are galvanically isolated from each other.

The module is designed for mounting on a 35mm DIN rail. The module’s width is 35mm, 2 spaces/modules in DB. In order to start the module, it must be connected to the CAN bus. The bus of the Ampio Smart Home system consists of four wires - two for power and two for communication between the modules.

In addition to the LED indicating the status of the CAN bus, on the front of the device there is also a red LED labelled KNX. If it lights up, it means that the devices have received a KNX telegram.

Defining the behaviour of the device in the context of the main functionality of the module - the communication gateway between the two standards of the building automation buses - should be considered separately for each communication direction. In both cases, this configuration boils down to defining a list of translation rules between protocols.

All the operations described in the following subsections are performed using the Smart Home CAN conﬁgurator software.

CAN to KNX translation

When preparing the rules for translation from the CAN bus to KNX, a KNX individual address should be assigned to the M-CON-KNX-s device. Each telegram transmitted by the device on the KNX bus will have this address in the source field.

The next step is to define a list of translation rules. Each translation rule points to a single output value of a specific device running on the CAN network. Sending of a telegram to the KNX bus is triggered by changes to its value. The form of the telegram to be sent is defined by specifying the destination group address (unicast messages are not supported), as well as the value of the control field and the KNX telegram command. The last component of the translation rule is a definition of the KNX data type on which the value from the device operating in the CAN network is to be cast.

KNX to CAN translation

Each translation rule from the KNX bus to CAN defines the destination group address of the expected telegram (receiving unicast messages is not supported) and the data type of its content. During translation, the value of the telegram command field is not interpreted. After receiving a telegram directed to a defined group address, the M-CON-KNX-s module interprets its content in accordance with the indicated data type and sends a message to the CAN network. The form of the sent CAN frame is defined by specifying the source MAC address of the virtual device on behalf of which it will be sent, and the data type on which the value from the device operating within the KNX bus will be cast.