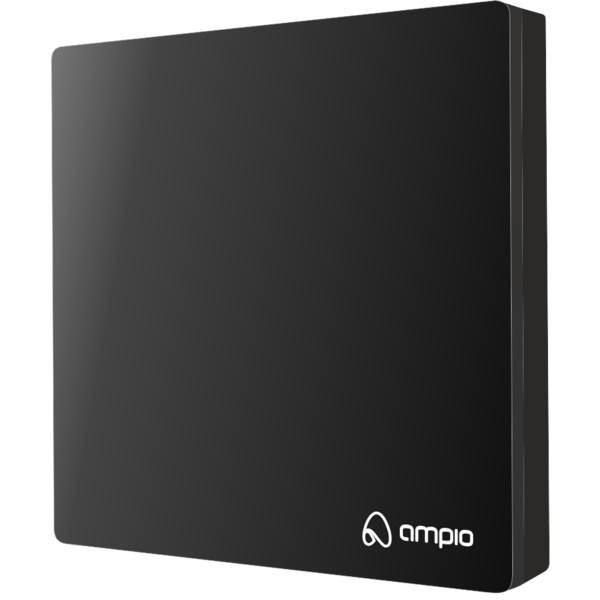 Module M-CON-IR is a component of the Ampio system. Required voltage to power the module is 11 — 16V DC. The module is controlled via CAN bus.

The module is used for IR integration. With the use of the module, it is possible to receive commands from remote controls based on the NEC protocol, and to send previously saved commands to external devices.

The module facilitates receiving commands sent by any IR remote based on the NEC protocol with a carrier frequency of 38kHz. Each command received by the device is broadcasted to the CAN bus. This information can be used as part of the configuration of other building automation devices.

The module allows one to save a pool of IR commands, which can be later recreated by it in order to trigger an action on external devices. It is possible to record commands from IR transmitters with a carrier wave of 38kHz using any protocol. The number of commands that can be memorised depends on their length and complexity.

The device is mounted directly on a wall or any other flat surface. The junction box is not used for the installation. The module consists of two parts - the body and the casing. At the back of the body there are two holes with a diameter of 3mm for mounting the device and one with a diameter of 9.5mm, which serves as a cable grommet.

After mounting the body, one should put the casing on it. The installation of the casing is a snap-fit.

The device is equipped with one blue LED indicator. If it lights up, it means that the device is currently in the state of recording an IR command. The LED also flashes when the device transmits an IR signal.

As far as the functionality of the IR receiver is concerned, no configuration of the device is required - information about each command received by the device is available by all devices operating within the building automation bus.

In order to show the CAN bus connector, the figure presents only the body of the module without its casing.